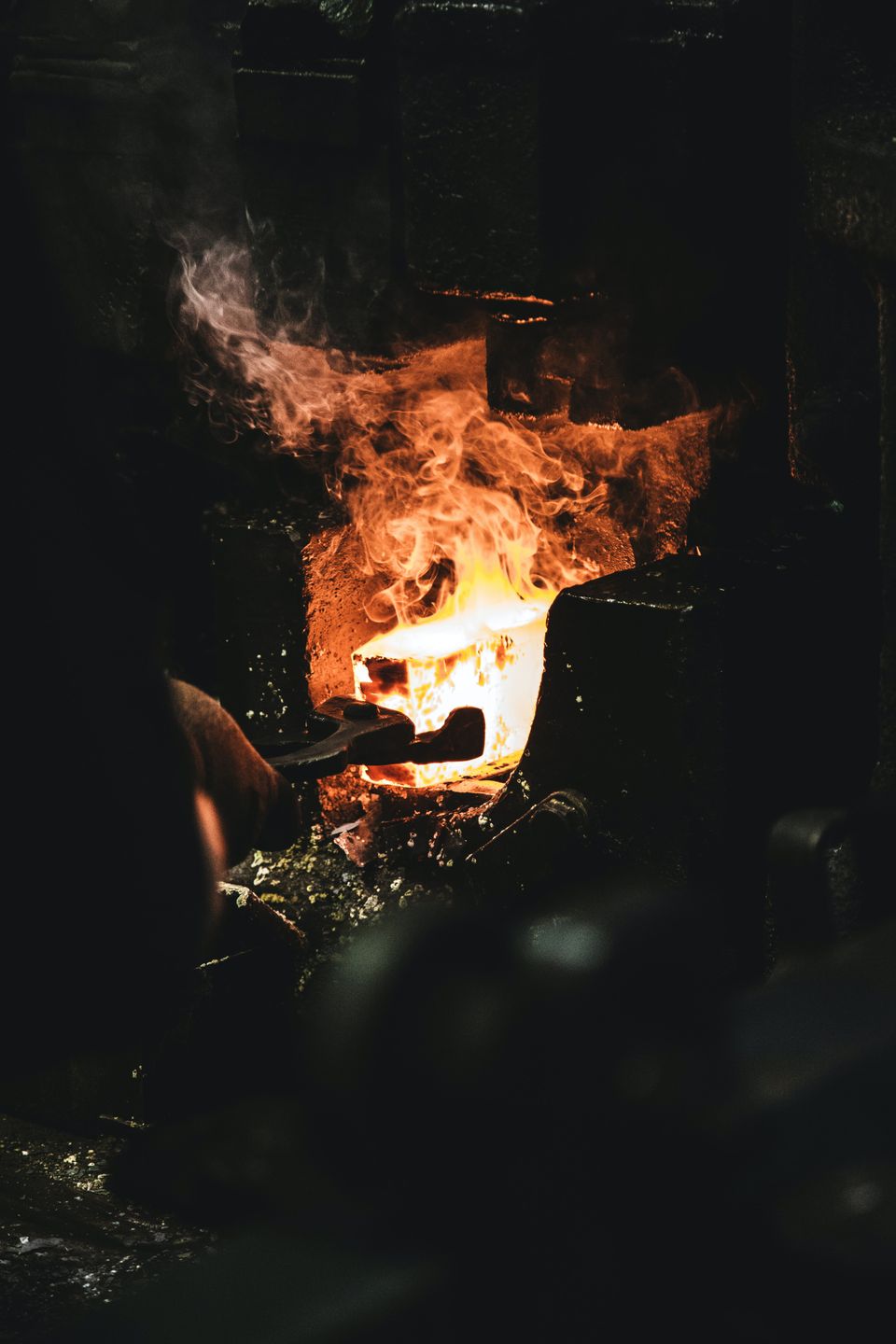 "You have to understand that people have to pay a price for peace. If you dare to struggle, you dare to win."

The Hero's Journey is a story telling schema where a protagonist engages in an adventure, faces trial and endures trauma--almost to the point of destruction, and then overcomes it--returning to the point of origin in a glorified form.  For example, in the Disney movie, the Lion King, we see a young Simba explore the Pridelands and coming to terms with being future King. He is innocent, he is curious, mischievous but not with malice. He then faces the trauma of losing his father and being without a home or family, loses his identity, eventually comes to terms with his identity, and must thereafter  contend with the challenge of dethroning the pretender to his throne. After these challenges are successfully faced, he fully assumes the role of King. This story telling motif is present in most contemporary stories involving a heroic figure. This template is also often used in the mythology of nation building. The sequence of events often being:

A) We had an idyllic past

B) We experienced tyranny

C) We revolted against it--almost lost; but eventually won

D) We achieved victory and built our successful nation/community

In a sense the cycle is reflection of human development; innocent childhood, traumatic adolescence, triumphant (and self-aware) adulthood.

Recently I've been thinking a lot about culture. How it enables organisations or communities to excel and live long relative to each other. I've also been thinking about the nature of sentience and the self; what makes us uniquely human; our ability to perceive new insights and create, to regulate ourselves in our pursuit of self-improvement. How the ascent of the self enables us to rise above our base nature as individuals--but also better enables us to live in community. How our self awareness can help us manage our relationships, and our own passions. I'm following up on these themes with this essay exploring the intersection of the self (a person) and culture (communion of people). I'm specifically interested in exploring how overcoming individual and shared trauma can shape individual and communal direction and therefore culture.

Stories that use the heroes journey as their schema are known to be satisfying. This is likely because human beings seek to find special meaning in trials and tribulations. If suffering exists, it must be for a purpose; and it seems that for most of us that meaning is the notion that enduring the suffering helps build our resolve, our character and imbues us with the strength to achieve our true potential. In this sense the pain of trauma is transmuted into strength that fuels the pursuit of destiny. In that sense, trauma becomes a forge.

A forge is a blacksmith's workshop; typically consisting of a furnace, moulds, hammers, anvils and other tools used to fabricate metal objects or tools. Metal is heated or melted in a furnace, and then hammered or moulded into shape. The entire process involves subjecting metal to intense stress by applying various kinds of energy to it. Using heat to weaken the metallic object, and then beating the metal into shape using a hammer against an anvil; whilst stretching or compressing it into shape. Whilst the process involves a lot of stress, the end of the process is a tool that is fit for purpose. What could have been a piece of useless scrap now has new utility.

The heroes journey speaks to how humans come to terms with pain and challenge. Either it is pointless and lacks meaning, which means life lacks meaning (too confusing to most people); or that trauma can have meaning and therefore is meant be instructive. Going back to my previous essay on "the eye of the storm." It would seem that the forge is how people transmute high pressure/stress energy into low pressure energy; rationalising the pain within the context of a storm decompression. It is the sentient being's approach to accepting trauma but refusing to be damaged by it--turning stress into strength. The self aware accept that they have gone through a stressful experience, and having accepted their circumstances either accept that it has no special meaning or that elect to give it meaning. In this sense they take the place of destiny. They are the blacksmith, and they are also the metal being worked. They accept that the fire of the forge will weaken them. They accept that the blows they have experienced are stressing--but they choose whether to imbue meaning to the process, or not. I'm more interested in the former; giving meaning to challenges.

Within the context of community building, the forge is a particularly useful means of creating internal cohesion through story telling. For example, every political revolution requires powerful tyrants, the underdog heroes then fight the tyrants in an impossible conflict. The fight is hard and almost impossible to win, but then because they are on the side of destiny (their version of it)--they win against all odds. They then create their version of a better society, as glorious victors. The good guys won, and the senseless tyranny they endured now has meaning. This is a societal level version of the storm system; with the revolutionaries taking the position of Moses; encountering transcendent consciousness--and taking their people to the promised land of enlightenment--or rather their version of it. Every revolution/movement needs its prophets--and its higher truths.

Moses' revolution resulted in the creation of a culture and community that has now existed for >3600 years. Part of this community's success and longevity comes down to its ability to overcome traumatic events and turn them into stories that reinforce their higher purpose. Going back to my essay on organisational longevity being related to sacred purpose--Moses' rendering of his community's purpose was that the community was chosen for eternal communion by a totally transcendent being. Consequently, as long as that transcendent and eternal being existed--the community would also exist. The trials, and the consequent victories over them would be expressions of the deity's commitment to his chosen community of mortals.

Perhaps what is true in theology and mythology is true in politics. The USA was founded on the principle that all men are equal and ought to enjoy freedom and the pursuit of happiness. To achieve this goal it had to go through the trial of a painful revolution. Victory in war became liberation from tyranny. The definition of freedom and the pursuit of happiness have continued to change in each generation, allowing the forge to continually allow moments of trauma that thereafter result in new glory e.g. the US Civil War resulting in the emancipation of slaves. Suffragette marches resulting in women being able to vote. The Civil Rights movement resulting in black people enjoying new freedoms, etc. Each of these cycles have involved new prophets teaching new truths; pushing the community forward towards its version of the promised land.

On some level I think sentience, consciousness, learning to manage the storm--it's of no utility if the community doesn't further itself. The point of all of this has to be building civilisation, and furthering human progress. To extending the frontier of what is possible. If being sentient involves the exercise of will over impulse, and the choice of order over chaos; it follows that a community of conscious people collectively do the same. They collectively exercise will over impulse, they collectively choose order over chaos, method over discordant action.

So, assuming for a moment that all of this isn't rubbish...what is the point of all of this for boys and girls living in Africa?

Perhaps the point is that we need to go to our own mountains, experience higher illumination, and then methodically improve ourselves both individually and communally. In doing so we will create, we will bring order to chaos, we build civilised societies where rules bring stability and peace where chaotic lawlessness exists. We will systematically improve ourselves by pursuing progress both individually and collectively. We will pursue knowledge as a consequence of higher being versus a desire to simply subsist. We will build our own civilisation, on our own terms. However, it would seem to me that to achieve that we need to embrace the forge.

The liberation era generation went to their mountain, and came from it believing that they were equal to their colonisers and consequently had to liberate themselves from tyranny. They built new nations that used the trauma of colonisation to create a sense of common identity and pain that could fuel their struggle for liberty. They then gained independence--becoming heroes; only to become the new tyrants.

Our generation needs to find its own mountains, find a higher truth and new purpose--and go out from there to face the forge. The first step is to seek out a grand adventure, to be disquieted about the status quo. To feel within ourselves that something isn't right about our circumstances. To acknowledge to ourselves that though we might not know what the answers are, we need to leave our present circumstances. To accept that along the way challenges will be faced, but that provided we remain steadfast in the pursuit of an answer. At the other end of the forge--we'll find it. To the extent we accept within ourselves that bettering ourselves and our community must be the outcome--perhaps we'll have the clarity to build a better world than the one we've inherited.

Maybe we won't get a Pan-African moment of ascent, maybe we will. Either way, anyone that feels disquieted by the status quo ought to search out their grand adventure. Dare to be the hero in your story. Dare to rule your storm, dare to find transcendence and and rise above yourself. Dare to push the boundary of what is possible, to contribute to the advancement of society; to forge a higher way of living, and build a higher culture. Dare to build. Dare to build something that lasts. If you don't know how, search with others; build with others.

Then He said to them, “My soul is deeply grieved, to the point of death; remain here and keep watch with me.” And He went a little beyond them, and fell on His face and prayed, saying, “My Father, if it is possible, let this cup pass from me; yet not as I will, but as You will.

It will be painful, it will be bitter--but drink from the cup. Eternity is on the other side.